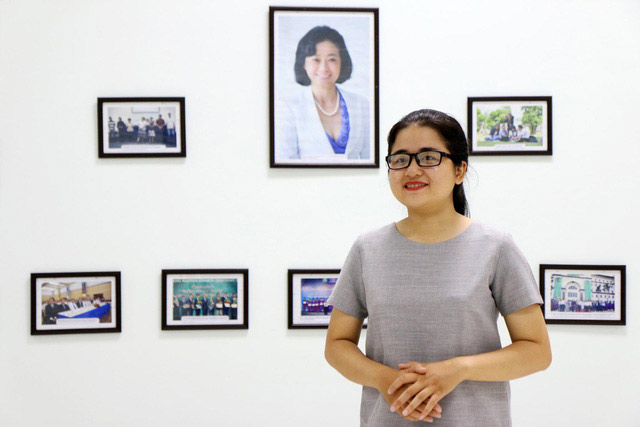 Le Thi Xuan Mai is one of 18 young Vietnamese selected to study in US more than one month after getting YSEALI scholarship in fall 2017. This is a prestigious, practical scholarship program which is from the idea of US President, Barack Obama, to strengthen leadership ability and connect within ASEAN region, make a profound close-knit of young leaders with core challenges in regions and in the world, and promote relations between the American and Southeast Asia young leaders.

Xuan Mai was born and raised in a sunny and windy city, Can Tho. From childhood, She has had a deep interest in the natural world. Some years later, Mai has loved to participate in social activities, especially environmental protection and conservation of endangered wildlife. Because of these “very adult” thoughts, Mai chose the School of Language and Humanities, Tan Tao University (TTU) without any hesitation or anxiousness. Mai understood that, in order to achieve a dream, she had to work as a team, act together with groups, be good at English to communicate with friends around the world, and join NGOs valuing to protect nature. TTU not only gave her all the necessary knowledge but also taught her the communication skills, confidence, the depth of thinking and the determination to pursue her goals.

“Life is not waiting” – Mai considered it is the guiding principle of her life. While friends applied for public universities, Mai chose a private university followed the American educational standard, Tan Tao University. Her parents blamed her for taking risk, but Mai thought difference. This Young girl was deeply aware that only when she studied in a complete English-teaching environment so she would be forced to speak English. Thanks to that, the improvement would be much faster. The lecturers, friends enthusiastically and effectively supported Mai which is making learning became an endless passion.

From the end of the second year, Mai spent most of the time after school to participate in environmental and wildlife conservation in Ho Chi Minh City and neighboring provinces. Wishing to raise awareness about hunting rare animals issue for public, Mai joined the Action for Wildlife Organization (AWO). This is the first youth organization in our country dedicated to the conservation of endangered wildlife species in Vietnam. Mai spent the whole time after school to work together with AWO, build a good society, say no to killing animals listed in the Red Book.

Xuan Mai is happy to share the experience of learning English with new TTU students.

Rough journey to get the YSEALI scholarship

Mai knew the YSEALI scholarship in mid-2015 and felt it was a very good opportunity to learn more about social issues, especially environmental protection – her great interest and attached area. However, Mai was not confident in her ability at that time. After thoroughly investigating all the information, she decided to register next year.

In May 2016, Mai began the journey to conquer YSEALI. At that time, because of busy learning, she didn’t well prepare for the application and was eliminated by YSEALI. After 5 months, in early October, Mai continued to try her second chance and also did not receive the better results. After each failure, this young girl pondered for a long time, analyzed the cause of failure to stand up and correct. Slow down, think more, constantly learn and cultivate knowledge was Mai’s changes after two failures.

In the third chance, Mai shared, She heavily invested in her application for content, appearance in such a way that information was not only complete, concise and compact but also brief and easy to understand. Writing essay is one of the most important parts. With only 500 words, the writers must introduce themselves so that the selection committee could recognize that they deserve to be chosen. The contributions to the program, the influences they will create in the community, nation, and Southeast Asia. What the chosen people will take the advantage of this opportunity to develop. And what the students did commit when they finished the course?

Whether presenting essays or face-to-face interviews, persistence and discernment of goals, maturity, flexible behavior, good communication would contribute to common success. “Passing four years at TTU, it is undeniable that TTU and all things belong to TTU are factors that help me develop myself and become me of today,” Mai said.

“Although this is not the first time I have experienced an interview in English, I still felt nervous. Fortunately, TTU’s environment has trained me for calmness, flexibility, depth of awareness, confidence with my choice. ” Finally, YSEALI gold table was named Le Thi Xuan Mai.

Tan Tao University – where stepped up Xuan Mai to be successful

In late September, Xuan Mai will leave for the United States. Mai and two young leaders in Hanoi arranged to study and experience at East-West Center, University of Hawaii. Mai is the second student of TTU receiving YSEALI scholarship. Previously, in 2015, School of Economics, Pham Hoang Man also got this prestigious scholarship. “With the quality of education today, I am sure that TTU will have many young leaders on all fields,” Xuan Mai concludes with a bright smile.