Tan Tao University has signed a Memorandum of understanding (MOU) with Cosmo Vietnam Company (Cosmo Group) on August 24. Cosmo is currently a production partner with world-famous brands such as Adidas, Nike, Puma. 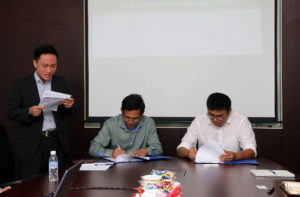 Representatives of TTU and Cosmo VN signed a memorandum of understanding on co-operation.

According to the content of this MOU, Tan Tao University (TTU) is responsible for recruiting and introducing graduated students with outstanding academic achievements based on the work demand of Cosmo Vietnam (Cosmo VN). In contrast, Cosmo VN creates conditions for TTU students to practice and improve their knowledge in the production environment applying high technology. After the TTU students are recruited by Cosmo VN, they will be created favorable conditions to learn and develop their abilities. 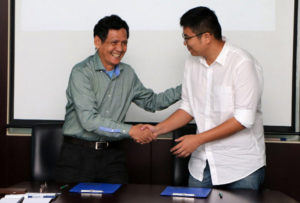 During working with the Management Board of Tan Duc Industrial Park (Duc Hoa, Long An) – where Cosmo VN chose to rent factories for long-term production stabilization, Mr. Orion Liu  had a chance to contact many TTU alumni who are currently working for the Tan Tao Group’s member companies. In particular, he was deeply impressed by Nguyen Hoang Thuy Duong, Assistant Manager of Tan Duc Investment Joint Stock Company (Tadico) because of  the professional working style,  confident, enthusiasm and youth of Thuy Duong. Moreover, the ability to handle situations acutely and actively, especially the high English level of Thuy Duong also make Mr. Liu’s attention. In broad terms, Liu said, this is TTU’s admirable training quality. “We need such talented people not only for Cosmo Vietnam but also for Cosmo all over the world.” That is the reason for the MOU between TTU and Cosmo VN.

In addition, Mr. Liu expressed his company will prioritize the utilization of local human resources when they chose Duc Hoa, Long An for investment for production and business. Mr. Liu also acknowledges that he prefers the college model next to the business. “That makes it easy for Business and university are able to understand and grasp each other’s needs.

Endorsing this view, Huynh Ho, Vice Rector of TTU, said: “It is no coincidence that TTU Founder President chose to construct this university at the middle of the E.City as the heart of this urban area. She understands the inevitable development of education is the training of international graduates who can fully response the strict and very legitimate requirements of employers. With the motto “ Quality matters more than quantity”, TTU only enrolls with a limited number of indicators each year. During the meeting with representatives of Cosmo VN, Mr. Huynh Ho expressed his deep belief that Cosmo VN had found the right place to recruit talents. Immediately after the signing ceremony, two students who are preparing to graduate of TTU were selected for the position of Assistant Director. Cosmo VN is urgently needed to recruit about 10 TTU students for important positions of the company so that the operation and production after September 2, 1977 is going well. Ms. Jenny Chen – Executive Assistant Cosmo VN repeated many times about the opportunities for TTU students at the signing ceremony. The starting salary begins from 10 million VND and will increase with the quality of work. 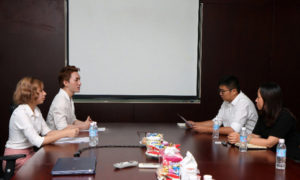 Student Nguyen Hoang Huong (School of Economics) and Ha Minh Dat (School of Languages and Humanities) with the Board of Cosmo Vietnam in the recruitment interview.

TTU is the first private university in Vietnam to be fully educated in the liberal arts education (Liberal Arts or Comprehensive Education) in English of famous US universities such as Rice University and Duke University. After graduation, TTU students achieved the English proficiency with IELTS at least 6.0 or equivalent or higher. English language students also learn a second foreign language such as Japanese or Korean. According to TTU statistics, 100% of students after graduation are employed. Many students are also “ordered” right before graduation by many businesses. Up to 89% of the students are enrolled in large businesses or multinational corporations such as Unilever, LG, Pepsi, Wall Street English Center, Odyssey Resources Vietnam.

YET- ON THE WAY TO THE DREAM