Nguyen Hoang Thuy Duong converges all elements that a young Vietnamese needs in the time of integration: creative thinking, deep knowledge, decisive work, progressive, can stand under high pressure and fluent in English.

These qualities were accumulated and developed by Thuy Duong during four years studying at Tan Tao University (TTU). When she was asked what contributed to her success, Thuy Duong asserted: “ITA scholarship has changed my life.”

Being born and raised in former poor civil servants family in Duc Hoa, Long An, Nguyen Hoang Thuy Duong cherished the dream of becoming an economics bachelor, working in a vibrant environment with several challenges. Since her parents are former teachers, they prefer a simple life style, so they were very annoyed when their daughter wants to learn economics. Not let her parents arrange her life as other young people, Thuy Duong unruly and determined to “encourage back” her parents to support for her choice.

Duong knows Tan Tao University while preparing to choose a university. From the first moment that she saw the spacious and green school campus; met friendly lecturers with proficient education, being explained the new liberal education model in Vietnam, Duong was extremely excited. However, parents were worried and her friends felt discreet, so everyone tried to prevent Duong from choosing TTU. At that time, Duong was the only one who bravely “reversed”.

Sharing her admiration about the female president of Tan Tao Group, Duong said: “She is a keen, strong, decisive leader, one of the successful business women not only in Vietnam but also in the international market. In addition, she is also an entrepreneur did many community activities. Together with Tan Tao, she has supported and gave many full scholarships for excellent students throughout 4 years of university. ”

Being one of the lucky students to receive the full scholarship for the 2011-2012 school year, Duong had the motivation and belief to follow the path that she chose. “ITA scholarships had given me the opportunity to get my parents’ consent to study at the Business and Economics School of TTU. If that year I did not consistent with the choice from my heart and desire, my life was not like today certainly. ITA scholarship changed my life.” 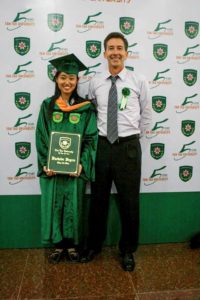 TTU is a non-profit university that aims to train international citizens who are ready to integrate into the world, serve the nation with talent and ethics. For 4 years studying at TTU, Duong understood deeply that it was not the theory but became vivid and clear reality.

Thuy Duong said: “At TTU, I was not only taught about the academic knowledge but also trained about soft skills such as speaking in front of the crowd, presentation skills, teamwork skills, communication skills and Language skills. Students are always given the opportunity to have real working sessions with businesses and organizations.”

“Most of all, the learning and working in English environment which students are often contacted with foreigners had shaped and built for me the mindset of an international citizen, not to hesitate or afraid of the new things.” Duong confirmed.

At the age of 24, while many friends are struggling to find a job, Thuy Duong succeeded and affirmed herself. At the end of the 4th year, thanks to being a good student, Duong has been facilitated by Tan Tao Group (TTG) and TTU to have a trial working period at the Sales Department – Tan Duc Joint Stock Company (Tadico). This is a company specializing in infrastructure investment and trading industrial zones in Tan Duc (Duc Hoa, Long An).

Having inherent stable English, advantages of a local citizen, creativity, bravery, passion for work and unceasing learning are the preeminent advantages for Duong to quickly pass the trial period, officially became an assistant for CEO. Brent Thomas Breachler. 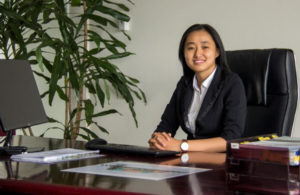 The workload of Thuy Duong is very high: supporting CEO in company operation, supporting companies operating in Tan Duc Industrial Park, involving in real estate field about industrial zone. They are all high-pressure jobs that require calm, ingenuity, intelligence, and creativity that are not easy for a 24-year-old girl.

“What I have today is the result of liberal education – progressive education, comprehensive liberation of creative capacity, arousing potential hidden in each person” Thuy Duong said.

Thuy Duong always works with all her passion, devoting herself to express her gratitude towards the kindness of President Dang Thi Hoang Yen for giving her ITA scholarship. “I am happy for myself and for all who also received ITA Scholarship. In the future, I will try to learn another foreign language as well as seek for other scholarships in order to study MBA abroad.

“We are willing to give the opportunity for young people who are thirsty with knowledge, have the depth of expertise, catch up and integrate quickly into the workflow as Thuy Duong” Mr. Tran Duong, deputy director of Tan Tao Group paid a compliment to Thuy Duong as well as gave a golden opportunity for young people who are studying and willing to write their dream with TTU.

YET- ON THE WAY TO THE DREAM