At 6 pm on December 22nd, at TTU Canary Club Conference Centre, Student Council celebrated the Christmas Eva with the theme of “Rendez-vous d’Hiver” ( the Date of Winter) the Huntsman and Snow white contest to find the face for the Christmas Show.

Prepared for one month before, from making ideas for script, if compared to the previous year, this year had new changes, especially the appearance of Nguyen Hoang Khac Hieu, a Master of Psychology and a “hotboy” teacher always “ solves problems” for young people who are disturbed about emotional issues that who they don’t know to share with.

At 6pm, the Canary Club Conference Center was covered by a lot of TTU and TTS students, Christmas songs that bring the atmosphere of Christmas to everyone were played in turn. The program includes the various performances such as dance, singing songs, drama, magic show and so on that were received cheers and warmly responses from all of the students. 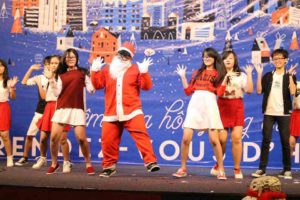 The curtain-raiser brings us the Christmas atmosphere, youth and adorability of TTU young students. 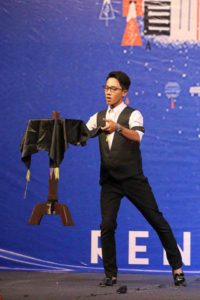 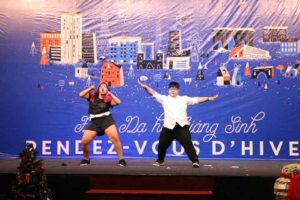 The show was so hot with the dancing repertory

Deserving to be a great friend of young people, Khac Hieu kept pace with the exciting atmosphere at TTU, began talking and sharing with TTU students to make “ hotter” for the event with lots of laughs. Through the “Read the letter” repertory written by TTU students brought so many emotions for everyone, helped to meet the need to solve the concerns and anxieties of almost all of students at the program. 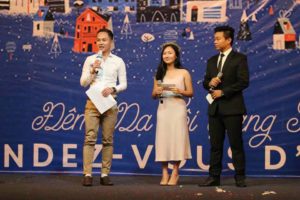 Khac Hieu is talking and sharing with TTU and TTS students

After sharing led by Khac Hieu, the students came to the announcement of the winner of the Huntsman and Snow white contest. Le Hong Van was selected as the beautiful Snow White and his friend Huynh Quoc Quan is the “hunter” of the Christmas program 2016 at Tan Tao University. 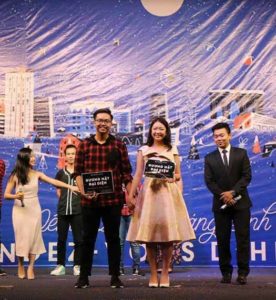 Ending the event with the buffet, talking and taking photos with Nguyen Hoang Khac Hieu, the guest of the event. 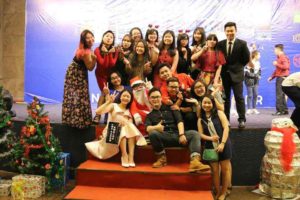 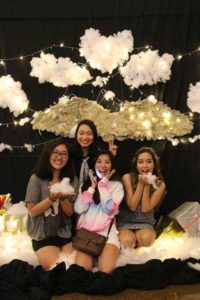 A “ lovely” picture of TTS students